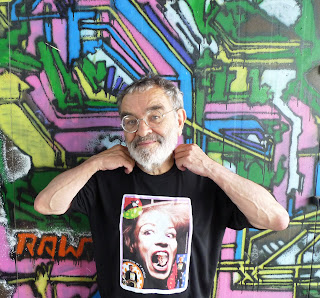 "... in Fernando Arrabal's Garden of Delights an actress tries to reject outside reality by diving head-long into her own created world, one littered with a series of surreal animal characters, including a half-man, half-ape; but no matter how far she submerges into her daydream reality, her real life and history are inescapable. Throw into the mix a healthy dose of sadomasochism, fame, time machines, nuns and violence and you have one hell of a fascinating play...
...this work was created by a man who spent three years as a member of Andre Breton's surrealist movement. Created in the 1960s, the work was written by one of most "genial" and celebrated writers, Fernando Arrabal, who has lived in exile from since 1955.
Garden of Delights comes to stage under the direction of PipeDreams' 23-year-old founder and director, Paul Terell. Perfectly fitting for the company, they aim to stage works that are imbued with providing the plays with imaginative interpretations, which in the past have seen the company stage shows in unconventional venues such as underground car parks.
This melding of a 1960s surrealist classic with one of the country's most inspired independent theatre companies is sure to produce something visually remarkable..."
Julianne Gill
Publié par Dominique Sevran-Amary à 14:48